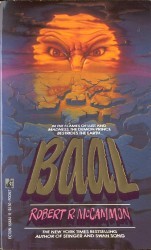 To say that I like Robert McCammon’s writing is like saying fish kind of like water. He is, without a doubt, my favorite author that ever put ink to paper. His writing has wrung out every emotion possible from within my soul and has helped shape who I am as a reader, writer and as a person. Yes, his writing is simply magical. So, it was a no-brainer when the opportunity came around to participate in the Robert McCammon Challenge. The RMC is where you read his work in chronological order, one a month, until you’ve completed them all.

Baal is McCammon’s first novel published way back in 1978. Many authors would kill for their first novel to have this level of quality. You can see that it doesn’t quite live up to the standard he set with his later works. Baal has shades that bleed through of the gifted storyteller that was to mature. McCammon was only in his mid-twenties when he wrote it.

It starts off well enough, with the rape of a woman in an ally who later gives birth to a child that is not quite like every other child. As you can imagine, this child grows up to be the demon, Baal. The story has three seperate parts. The first is rape and the life of Baal being shuffled in and out of every orphanage school you can imagine. This is where McCammon shines. Baal is Damien from the Omen to the tenth power. Throw in a little Isaac from Children of the Corn and you get the idea as he round up his minions to do his bidding.

The second part has Baal as a man leading some religious building/gathering in the Middle East. The bleak atmosphere radiates from the pages. You literally feel like your dying of thirst and your skin is blistering, but the transformation into Part III is hurried and muddled.

The last part again uses McCammon’s uncanny ability to build the setting and atmosphere to it’s fullest height. The arctic landscape pictured here makes you shiver and your hands go numb as you follow the characters chasing Baal. Then there’s the ending. Not my favorite. In fact, it felt like McCammon had spend all of his energy on creating the journey that he didn’t quite know what to do with the ending. While it’s not bad – I’ve definitely read much worse from other “masters” of horror – it feels very anti-climactic. Michael’s ability to control Baal without much trouble what-so-ever seemed like a stretch. You’ll see what I mean once you read it. Overall, still a very solid read that lets you have a glimpse of a newborn master storyteller learning how to walk.

3.5 Mangled Hands out of 5
You can also follow my reviews at the following links:

One thought on “Baal – Robert McCammon”